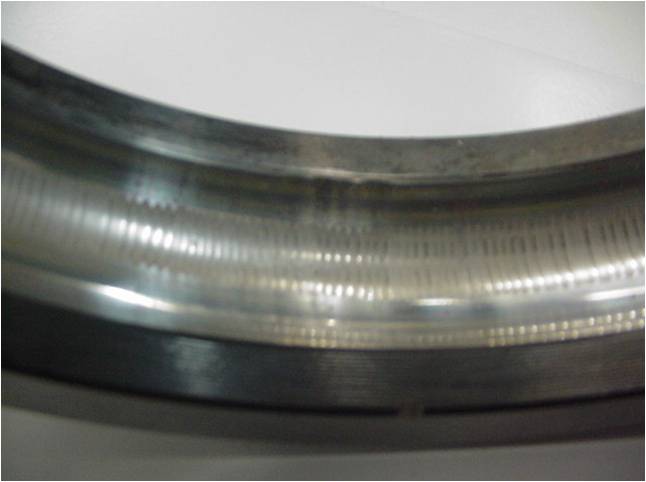 In the age of variable speed drives bearing fluting damage is becoming a dominant failure mode in electric motors. I have experienced motors as low as 37 kW see damage in a matter of weeks. We strive to extend motor service life between overhauls to years.

In this article I'll explain why it happens and some of the good & bad remedies.

This failure mode is difficult to detect with Vibration Analysis as no defined impact zone exists but a board spread of damage. Trending the 1-20kHz alarm is by far the most effective. VA only detects the problem doesn't eliminate it.

Lots of remedies are discussed in the industry such as Insulated Bearings, Grounding Brushes, Motor Grounding, Drive chokes,  etc etc.

First a little experience we had with a 400kW motor which we detected bearing fluting. I grabbed an old temperature probe approximately 500mm from the rubbish heap and ground a point on the end, wrapped the probe shaft with electrical tape and headed off with our electrical supervisor with his Crow Oscilliscope.

I jammed the probe into the fan cowl and made contact with threaded shaft end and held a good pressure on it while the motor was running. Our supervisor attached the Crow and we measured 110 Volts DC spiking 3 to 4 times per second to ground. That means the bearings were seeing welding style current, no wonder they don't last very long.

We were recommended an insulated bearing by a major bearing manufacturer, well a short time after the problem came back. The PT100 temperature probe had cracked the outer protective layer.

We installed grounding brushes which worked really well until they wore out, placing them end on the fan end shaft is way better option. All these remedies are a bandaid to the problem.

So what is the cause?   When a variable speed drive is installed normally it specified with a rated cable, but I have seen drives installed without changing the cable which is a real concern.

The cable is a low capacitance type with a sheild which should be grounded both ends. EMF rated cable glands are a must which ground to the motor terminal box. Grounding the sheild lowers the capacitance if good termination applied.

The drive end termination should pigtail plait the sheild pass the gland and bonded to an ectrical earth that has been tested. I've seen cables partly burnt at the motor gland from high resistance bonds.  I recommend the SKF TKED1 wand which during our Motor Health Assessments is a standard test.

The manual states to measure around the bearings but from experience the root cause is the electrical circuit between the drive and motor, so measuring around the cable glands is far more effective.

What causes the electrical spikes?

Electrical circuits are very similar to mechanical resonance system. Everyone should know to get rid of resonance you need a stiff system with lots of mass that lifts the natural frequency away from running or multiple of running speed. Electrical circuits are the same. Capacitance (dominantly the cable) is the spring (stiffness) and the motor coil is the mass. Get this wrong and a standing wave of resonance will induce  a voltage many times line voltage at the motor windings.

Some discussion suggests dropping the switching frequency on the drive helps and it does but its the trigger of resonance and the problem remains.

Hopefully now you can see Insulated bearings, shaft brushes don't fix the problem. The problem is caused by mutual inductance across the air gap in the motor.

The root cause is the relationship between cable capacitance and motor windings Inductance. Another option is to add Chokes (Coils) to the drive end thus increasing the electrical mass this will dampen the natural frequency. The underlying issue is cable length between the drive and the motor, which is specified by drive manufacturers. The problem is engineers like to design nice switchrooms, and push cable length specifications to the limit or disregard them.

As reliability professionals we need to introduce installation specifications for our capital peers to follow.

Electrical resonance is not limited to variable speed drives, it can occur on a DOL (direct on line) systems with low PSC (Prospective Short Current) and high  KVar systems, but thats for another blog.

Our offering of Motor Health Assessments can quickly identify which electrical motor systems are at risk in your plant.